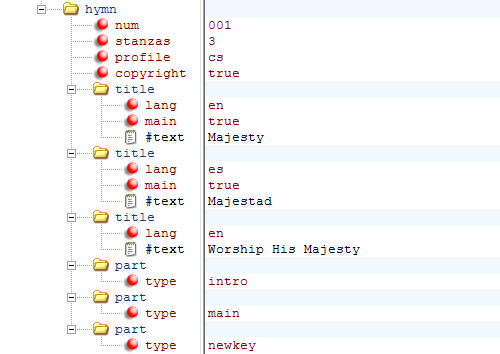 And that completes the hymn. Repeat the process for each hymn in the hymnbook, and the table of contents will be ready to import into Gloria.

Gloria will always play in the order (1) intro, (2) main, (3) second version, (4) new key, and for general sanity it’s good to add them in the same order to the table of contents file. But part elements can be listed in any order. Add as many part elements as there are MIDI files for the hymn, as few as one and as many as ten.

Part elements must be child elements of a hymn element, and the hymn must have a valid num attribute.

The “type” attribute is required. If you don’t include it Gloria can’t add an unknown part to the hymn. Its value is one of the items from the following list:

The “alt” types represent the MIDI files for the Alternate Version of the hymn.

Only one part per type is needed in a hymn. Multiple parts with the same type are redundant and will be ignored.

The type attribute is only allowed in the part element.