You have the option of exporting a hymnbook. This creates a single file containing an entire hymnbook, including the table of contents and all the MIDI files. This file can then be distributed to other Gloria users.

To generate a hymnbook distribution file, select the hymnbook element and select Insert / Element / Child. Set the element name to “export” and the value to “Test” (without the quotes). The document so far will look like this: 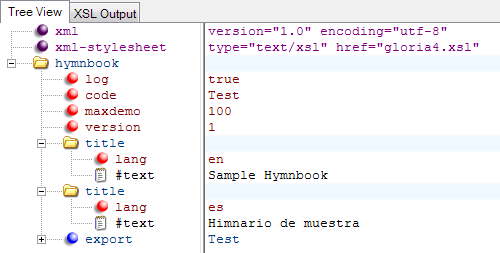 The export element value (on the right) is the file name for the hymnbook export file. It’s limited to 8 characters and must conform to basic filename requirements (e.g. start with a letter, only letters and digits, no spaces or punctuation). The export file will be saved to the “Music” folder on the USB memory stick.

A special case is where the table of contents XML file has an export element but no hymn elements. In this case Gloria will not go through the import process at all. It will simply export the hymnbook that matches the code that already exists in Gloria. Hymnbooks supplied by Gloria Music cannot be re-exported using this no-hymn technique. You can only do this with hymnbooks you’ve created yourself.

You can add multiple export elements to export the same hymnbook to multiple files. See below for an example on how to use this feature.

Export elements must be child elements of a hymnbook element.

To create the example, select the existing export element and add a new element (Insert / Element / After) named “export” with value “Test0087”. Add a child attribute named “id” with value “Q334007-61-00AF-0087”. Repeat for as many serial numbers as necessary.

The id attribute is only allowed in the export element.