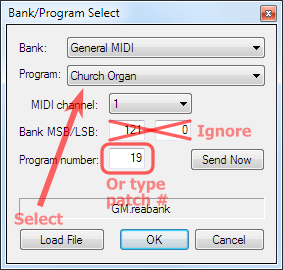 Keep in mind that at the start of every file the Gloria synthesizer is reset to Acoustic Grand Piano. Let’s say you start with a MIDI file that includes intro, main verse, bridge and final verse all in one file, and then split the file into multiple files (intro, main, second version). While the music was in one single file, instrument changes remained in place on each channel until the next instrument change. If the Melody on channel 1 was set to Flute in the intro, the main verse would continue with Flute. When split into multiple files, the intro file would contain the Flute instrument change but the main file would not. So on playback the song would start with the Melody set to Flute during the intro, and then abruptly switch to Piano at the start of the verse. Thus, when splitting a MIDI file into multiple files for Gloria (and when creating those files from scratch), be sure to include a Program Change command at the start of every channel for every file such that instruments are correctly carried over from one file to the next.

Changing instruments will affect new notes on the same channel following the change. It has no effect on notes currently playing.

Some software (Reaper, for example) will always add a Bank Select command alongside the Program Change command. Delete the Bank Select afterwards to save space or just don’t worry about it.

Different instruments vary in overall loudness. Some instruments work well with others. Some combinations clash. Instruments with a well-defined attack, a punchy, almost percussive start to each note, work well on lead tracks such as Melody and Bass because they give good cues to the singers and help keep everybody on tempo. Instruments with gradual, mushy attack and release, the lead-in and lead-out of each note, are better suited to background tracks such as Accompaniment. Experiment with the instrument keys on Gloria to get a feel for how each instrument sounds. Hold down the Synthesizer key for three seconds to access an on-screen selection of any instrument within the General MIDI set, including instruments that can’t be directly selected using the normal instrument keys.

The instruments from 81 to 104 are entirely artificial, so the names and sounds are somewhat arbitrary. Apply according to taste.

Here’s a table of the instruments available in Gloria. Note that patch numbers are sometimes started at 1. This manual uses the convention of starting the patch numbers at 0. The General MIDI instrument set extends to patch #127, but patches #120–127 are not implemented in Gloria.

Things to Keep in Mind

Gloria can synthesize up to 42 voices at once. In a common scenario the Melody, Alto, Tenor and Bass tracks are playing one note each. The Accompaniment track is playing four notes and the Percussion track is playing four drums (or cymbals, maracas, etc.). At one voice per note, that’s a total of 12 voices. However, each voice usually continues to play after the note has ended. The release portion of the note trails off even as the next note begins, so at the very least there are now 24 voices playing: the current set of notes plus the remains of the notes that went before. And notes often overlap, even when there’s only one note per track, adding to the total number of active voices.

Some of the instruments are synthesized with more than one voice, as noted in the table above. Each note uses two voices (or more) when playing with one of these instruments. Now the example above is using 16 voices for eight notes, plus four for percussion, for a total of 20 voices. Include the overlap from the previous notes to get 40 voices playing at once. So you see how quickly you can reach the limit.

Some of the instruments have a longer than usual release (two seconds or longer), as noted in the table above. The release phase is the part of the note that continues to sound after the note has ended. Think of a bell continuing to ring after it has been struck, or a guitar string continuing to vibrate after it has been plucked. Notes with a long release continue to use a voice long after the note has ended, while other notes come and go. So instruments with a long release are more taxing on the system than others.

Gloria uses various tricks to get around this problem. About half the percussion instruments can be replaced outright by other percussion instruments (eliminating the overlap) without the listener noticing. If there are no free voices Gloria will cancel the quietest voices, the ones that have had the most time to trail off into silence, that contribute the least to the overall sound. Again, the listener doesn’t notice.

Some of the instruments create a stereo sound, as noted in the table above. They have a different but complementary sound for the left and right audio channels on the Line Out connector. The stereo audio is mixed into one mono channel when using the built-in speaker (Gloria only has one speaker), but you can enjoy the full stereo effect when using headphones or when connected to an external stereo system.

Most of the instruments are marked “Refined” in the table above. Those instruments have been individually tailored and fine tuned to work well with Gloria music. The few remaining instruments have not been tested in live accompaniment. You may use them, of course, but you may want to evaluate their suitability before committing to active use.

These are the percussion instruments available in Gloria. They are played from channel 10.