During play Gloria has to find the actual MIDI files. The hymn will play if the external hymnbook is present, the referenced hymn exists and the required MIDI files also exist. Otherwise the user will get a message informing them that the hymn they’ve selected is not present.

Here’s that process applied to the example in this manual: 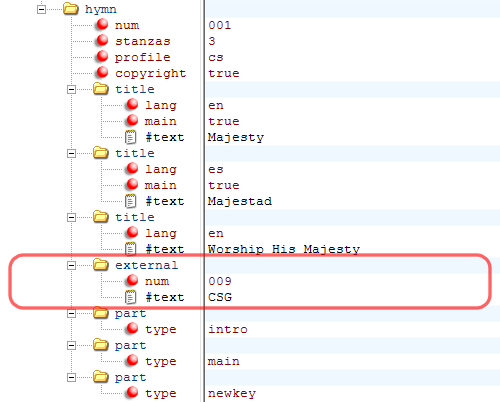 To do this, add an element to the hymn, name it “external” and give it the value “CSG”. Add an attribute named “num” with the value “009”.

Only the MIDI files are sourced from the external hymnbook. So the hymn element still has to include a complete set of details, including a hymn number, number of stanzas, dynamic profile, title (or titles) and parts.

External elements must be child elements of a hymn element, and the hymn must have a valid num attribute.

The num attribute is allowed in the external element and the hymn element.